Battle Blitz (aka Global PVP) enables the player to conduct invasions beyond their neighbors. The player will be able to click on the global PVP icon which is just below the Build Menu and leaderboard icons. This will bring up the Battle Blitz menu which consists of a series of 15 randomly selected opponents along the bottom of the screen (just like your neighbor list). In addition, a 24-hour timer will start ticking. Starting from the leftmost, you have to opportunity to attack one player, just like a normal invasion. If you defeat that player, you receive five Battle Blitz Tokens which you must spend immediately in the Battle Blitz Prize Machine before you can move on to the next victim. If you leave Battle Blitz mode before spinning the machine, you will lose those Battle Blitz Tokens. If you manage to defeat all 15 players before the 24-hour timer runs out, you get the same number of tokens and no prizes(so it is useless to rush to defeat them all)

In Battle Blitz, you have a choice to battle up to a maximum of 15 random players in Empires And Allies that are about the same level as you so you can practice campaign battling. You could activate this by clicking the Battle Blitz button on your toolbar and 'invade' the first player.

When you click 'Fight!' on the bottom of the player, it tells you to choose a spot for your invasion. Be careful, that when you invade somebody at a place with little or no Military protection, you will have to fight a bunch of advanced Units. Choosing a place in their empire with a lot of Military will end up with an easier battle, so it will be best to make your empire 'unguarded'.

Once a player have finished battling, he/she will get the Coins, Wood (for Lumber Mills trees), Oil (for Oil Wells), Ore (for Ore Mines,stones) and Infamy based on the area invaded and get to spin the Battle Blitz Prize Machine! It costs 5 Battle Blitz Tokens (get 5 when finished battling a person in Battle Blitz) or 5 Empire Points.

By spinning the Battle Blitz Prize Machine, you could get:

A player can battle up to 15 people within 24 hours (a day), and when that time period is over, it refreshes and lets you battle new people you haven't battled yet. (Note that when you start Battle Blitz, the timer will automatically start). You can leave Battle Blitz if you don't want people to invade you or if you don't want to battle in Battle Blitz.

"Fight Battle Blitz foes in 24-Hour rounds to earn Prize Tokens and win rewards on the Battle Blitz Prize Machine. Prize Tokens do expire, so use them fast. Opponents are randomly selected by level from all players, whether or not you're Facebook Friends. You will share your first name, profile photo, and game statistics with foes."

"Join the battle, save the world! Battle Blitz mode allows you to enter battle with people other than your Neighbors. You will earn Prize Tokens used to access exclusive rewards on the Battle Blitz Prize Machine. As you can invade opponents, they may also invade you and will view your first name, profile photo, and XP and Black Heart Levels."

When you invade another Non-neighbor empire in Battle Blitz, you get rewards based upon the area you invade. The amount of loots drop is different from neighbor Pillage Rewards. 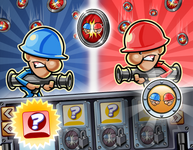 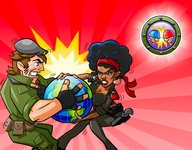 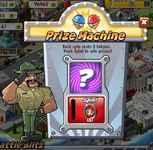 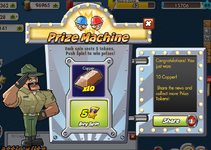 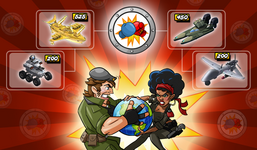 Add a photo to this gallery
Retrieved from "https://empiresandallies.fandom.com/wiki/Battle_Blitz?oldid=142710"
Community content is available under CC-BY-SA unless otherwise noted.