The Campaign Missions give players the chance to fight The Dark Alliance and ultimately defeat them earning powerful Villain Units along the way. 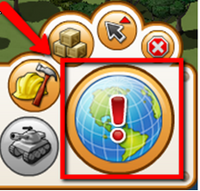 1. To play the campaign, click on the strategic map on the main screen. The map is the globe located in the bottom right corner of the screen. 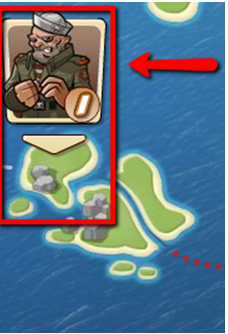 The island you are on will have a picture of the boss.

3. Any island with flags on it means you've liberated it.

4. To fight on the current island, click the boss picture to bring up the island’s information. A small screen opens showing the boss, the name of the operation, how many battles have to be fought to win the island, how many of those battles have been completed, what kind and how many Units will be fighting in the current battle, and the choices to Fight Now or see Further Details.

5. You can use this screen to see the details of every mission on the island. You can enter combat from this screen by clicking on Fight Now!

6. When the mission opens, you will see the opening screen for combat. You must choose a certain number of Units from your available Units, or you can purchase the required Units with Empire Points. In most missions, you must select one or more allies to join you. These allies can be your Neighbors or mercenaries hired for Empire Points. 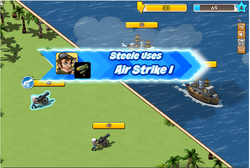 7. After you use a friend as an ally in battle, that friend will not be available for combat for another 18 hours. You can hire a mercenary for Empire Points if you are out of available allies.

8. In certain Campaign missions, you fight important members of The Dark Alliance. If you win these battles, you unlock the next leg of the Campaign and gain access to more powerful Villain Units. These Units are one of a kind and pack an enormous punch compared to the Units you can normally build. When you win these Units they are shown in the Reward screen at the end of the battle.

9. On October 14, 2011, Campaign Mastery was introduced as a way to gain Mastery Tokens to purchase gold campaign boss units. A player can master each battle 3 times.

Details of the battles are available on the Battle Map.

Retrieved from "https://empiresandallies.fandom.com/wiki/Campaign_Missions?oldid=142701"
Community content is available under CC-BY-SA unless otherwise noted.