Combat occurs when your units engage a group of enemy units. This can be part of a Campaign against the Dark Alliance or when you invade or defend against an invasion by of your friends or participating in Battle Blitz and World Domination which enable player to conduct invasions beyond their neighbors or playing against the AI in Survival Mode surviving as many waves of enemys a player can hold on for.

All units of one side in an engagement is either on land, sea or air. Land, sea and air units are a member of one of 3 classes.

Units within the same class have colorful names and graphics that may suggest they have special capabilities that others of the class do not have. This is not the case. The only item besides class that is relevant to combat is the unit's "Health" number. This affects both the unit's offensive and defensive strength.

At the beginning of Combat, the player selects a group of units to use in battle. The number and type of units you can select depends on the Campaign. During Invasions, the player can field up to five units. You can select any unit you currently own or buy a unit for Empire Points. 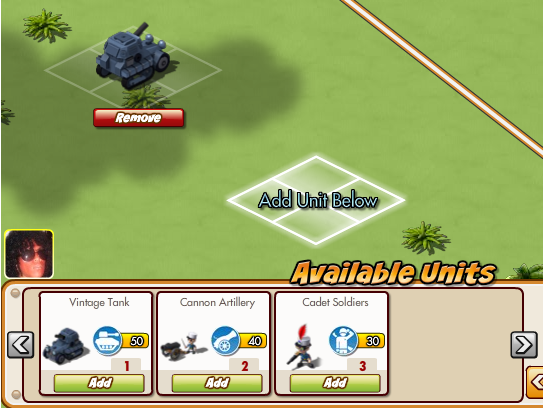 During combat, you select one unit to fire each round. To select which unit you want to fire, click that unit. When that unit is highlighted, it is outlined in blue. Every shot fired costs 1 Energy. 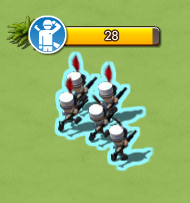 After selecting the unit you want to fire, you select a target. To do this, hold your mouse pointer over the enemy unit you want to attack. The unit you hold the mouse pointer over is outlined in red. When you do this, the game displays the chances of hitting the target as Poor, Fair, or Great. To attack the target, click the enemy unit and watch the bullets fly! 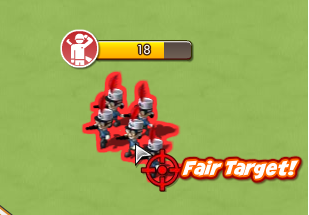 Damage in combat is determined by how you hit the target. How much damage depends on the strength of the unit, the type of unit being attacked, and the kind of hit.

There are three kinds of hit:

During combat, if any of your units are damaged, you see a green cross next to the unit’s health bar.

Clicking this cross heals ALL the life points for the unit at the cost of 4 Empire Points per use, but doing so consumes your turn and the enemy attacks. 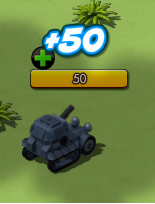 At the end of combat, if you win you receive a reward. If you lose, you can retreat, rematch, invite friends as allies, or request gifts from your friends.

Along with the satisfaction of victory, there are a lot of rewards you can earn from combat.

The biggest source of rewards for Combat comes in the form of Combat drops. Combat drops come from enemy units damaged during a battle. 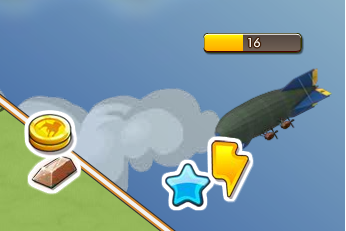 How much a combat drop pays out depends on the kind of hit you score. Glancing hits drop XP. Direct hits drop XP and a Coin reward. Critical Hits and Kills drop multiple Coins, XP, Energy , and Ore. Keep an eye on your bonus bar during the fight: this fills up from your successful hits, similar to normal game play.

If you win a Campaign mission, in addition to the combat drops, you receive the victory reward. The reward appears in a pop-up window and gives Coins, XP, and a Liberty Bond if you play Campaigns. 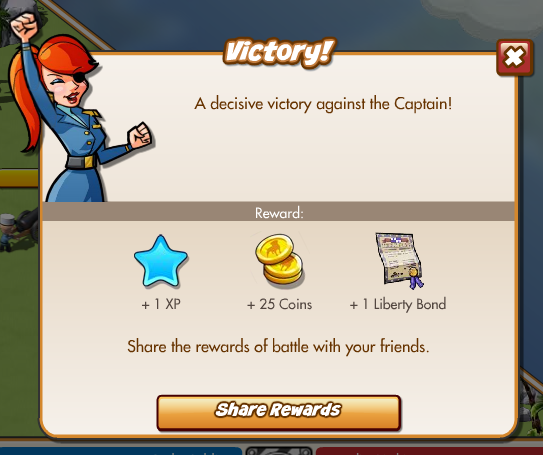 This is old formula: The following formula approximates how damage is calculated during combat. Possibly the unrounded intermediate steps aren't used, and further research may reveal a more accurate formula.

Glancing Blow is the above *.1

Retrieved from "https://empiresandallies.fandom.com/wiki/Combat?oldid=142728"
Community content is available under CC-BY-SA unless otherwise noted.